Thanks to Elyn Jacobs for providing the enclosed information:

Hormone receptor status has long been a main factor in considering breast cancer treatment. Many women worry when they hear that their breast cancer is both ER+ and PR+, believing this to be “double trouble.” It is time to set the record straight.

Actually, doctors have known for a long time that women with high levels of both estrogen and progesterone receptors (high ER+ and PR+ status) often have the best chance of surviving. Despite this, it appears that some oncologists may not really understand or explain one very key point…

While estrogen can fuel a tumor’s growth, progesterone puts the brakes on that growth. Hence, they leave patients in a sea of fear and confusion unnecessarily.

What are Estrogen and Progesterone Receptors, and What Do They Do?

Estrogen and progesterone receptors are proteins found within many of the cells of our bodies, including cells in the breasts. Both receptors are directly involved in switching genes on and off − some 470 different genes. When estrogen and progesterone are present, these hormones stick to their respective receptor. They can then attach to specific regions of our DNA and turn genes on or off, changing the cell’s behavior.

The late John Lee, MD, author of What Your Doctor May Not Tell You About Breast Cancer, was on to this years ago. He maintained that when activated by progesterone, the progesterone receptors attach themselves to the estrogen receptors.

Once this happens, the estrogen receptors stop turning on genes that promote the growth of the cancer cells. Instead, they turn on genes that promote the death of cancer cells (known as apoptosis) and the growth of healthy, normal cells. Yet few seem to have been paying attention to his advice. Therefore, many doctors continue to villainize progesterone and progesterone status.

Hopefully a study published in the Dec 2016 edition of the journal Nature, led by Cambridge-based Cancer Research U.K. researcher Dr. Jason Carroll of the University of Adelaide in Australia, brings more credence and awareness to the benefits of progesterone and progesterone receptor-status.

The presence of both ER and PR status has typically been considered an indication of how good a woman’s chances of surviving were. The belief being these cancers were more “treatable” than hormone receptor-negative cancers.

But, the most important part was the overall effect this has on the cancer cells themselves. Progesterone seemed to cause the cells to stop growing as quickly. Dr. Carroll’s findings further explain why the receptor itself is the direct reason why women who have both ER+ and PR+ have a better outlook than those with just ER+ or receptor-negative cancers.

The Role of HER2 and Progesterone in Breast Cancer

Two other recent studies suggest that metastatic dissemination of tumor cells prior to the detection of a primary tumor is regulated via HER2 expression and progesterone signaling. By implicating progesterone in the development of early metastasis, one could infer that progesterone is bad.

However, it is this author’s opinion that it is important to understand the difference between progesterone that is made by the human body and synthetic progesterone, which is unnatural to the body.

Progesterone is a key physiologic hormone of women. But while natural progesterone has an anticancer effect, synthetic progesterone (found in birth control pills and hormone replacement supplements) does not. For example, research shows that the synthetic version progestin (medroxyprogesterone) is not only linked to breast cancer, but that those cancers tend to be “more aggressive and deadlier.”

Furthermore, researchers have known for some time that synthetic progesterone does not stimulate activation of the tumor suppressor gene p53 when it attaches to progesterone receptors.

P53 is a repair gene, which protects cells from becoming cancerous. It is the primary gene that protects women from breast cancer. In order for progesterone to facilitate the production of p53, it must attach itself to progesterone receptors.

Clearly, it would be a good idea to down-regulate HER2, maintain healthy progesterone levels, and avoid synthetic progesterone. (While Herceptin is the drug of choice for HER2, daily consumption of 25 grams of flaxseed has been shown to decrease HER2 expression by 71%, which appears to outperform the drug, sans the damaging effects of drugs.).

Doing so could not only increase the chances of recovering from breast cancer, but could also help avoid getting breast cancer in the first place.

You are now empowered with the truth about progesterone and breast cancer. Please share this vital information with friends and family who could benefit. 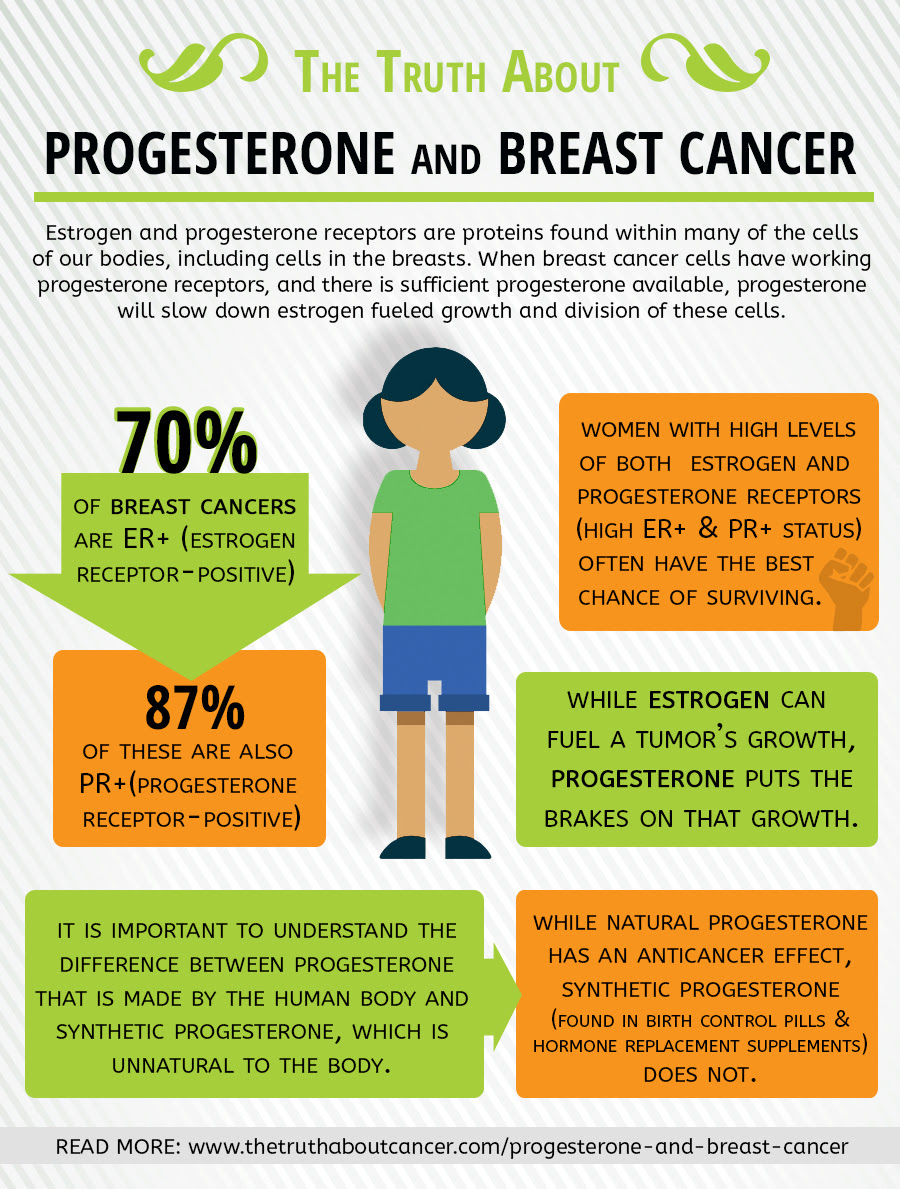